Canada has the highest number of motor vehicle crashes related to alcohol, according to a 2015 study by the Centers for Disease Control and Prevention (CDC). Parliament is cracking down on this more than ever with dire consequences; a law has recently come into effect where drivers can find themselves in jail for driving behind the wheel two hours after consuming alcohol. Driving under the influence is a serious crime with potentially deadly consequences. Those who drink (or partake in substances, like marijuana) and drive are likely to have a car accident, causing lifelong trauma to every driver and passenger involved in the event.

While alcohol affects each individual differently, even just one drink can greatly impact your motor skills. If you choose to drive after drinking, you may experience:

Alcohol drastically reduces the crucial skills that are needed to operate a vehicle safely. When you’re behind the wheel, your quick reflexes may help you avoid a dangerous situation, such as being cut off by another driver or a pedestrian unexpectedly crossing the road. With your senses impaired, your ability to react in time to these scenarios will be hindered, resulting in an accident or fatal collision.

The effects of marijuana while driving can be just as serious as alcohol. Additionally, some drivers will take marijuana at the same time as drinking alcohol. This greatly increases your risk of impaired motor functions as opposed to just partaking in one of these substances.

What Are the Penalties of Driving Under the Influence?

Driving while intoxicated can not only endanger your life, but it can lead to your conviction of serious legal charges as well. When your blood alcohol content (BAC) level reaches 0.08% or your THC (marijuana) levels reach 2 nanograms, you are considered legally impaired and should not be driving. When combined, the prohibited level is:

Under Canadian law, you can be charged with DUI if your ability to drive was affected in any way by drugs or alcohol, even if your consumption was below the legal limit. Be wise and wait until these substances are out of your system before getting in the driver’s seat.

In January of this year, Bill C-46 came into effect. The bill outlines that the police are free to demand a sobriety test from individuals who were driving within the last two hours. This new law has, unfortunately, caused several problems for Canadians because it’s flawed.

Case in point: Lee Lowrie, a Nanaimo native, and her boyfriend drove to Williams Lake to pick up his children. Before getting there, the couple headed to Lowrie’s sister’s home in Maple Ridge. The couple also had lunch at a pub where they both had a cocktail with their meal. They arrived at her sister’s home, and had some beers by the pool. Lowrie received a phone call from the police, and they arrived at the house, asking Lowrie to take a breathalyzer test.

With Bill C-46 implemented, police are legally allowed to ask for a breathalyzer even if the suspect doesn’t show signs of impairment. Lowrie failed the breathalyzer test and tried to explain to the RCMP that she had been drinking after arriving home. Despite the empty beer bottles she offered as proof, Lowrie received a 90-day licence suspension, a 30-day vehicle impoundment, and she had to take a mandatory driving course. Additionally, she had to figure out how to get to her boyfriend’s kids and how to get back home.

Although Lowrie eventually won her case, the experience set her back financially by $3,500.

Due to the increasing complaints about the new law, Solicitor General Mike Farnworth and his federal colleagues have written to the federal minister and are waiting for his response on the matter.

Can You Receive a Pardon for a DUI?

Once convicted of a DUI, the offense will be recorded on your criminal record. Canada considers DUIs to be very severe: if you possess a DUI charge, you may experience problems getting a job, applying for a student loan, or engaging in volunteer work. You may not even be allowed to cross the border into the United States due to possessing a serious charge. Because of this, many seek out a pardon for their DUI.

A pardon—or record suspension—removes your criminal record from the public system. A person can see your criminal record only if you or the Public Safety Minister of Canada provide written permission. To obtain a pardon, you must wait five years from the time the sentence was completed or the fine was paid from your charge. You should pay your fine as quickly as possible in order to expedite the pardoning process. Compiling and completing all the necessary documents for a pardon application can easily take over a year.

We encourage you to stay safe and sober while driving, but if you find yourself charged with a DUI, Gambriani Law is here to help. Since DUIs rely on machines, there is the chance that the technology failed to provide an accurate reading. Our compassionate and professional staff is here to assist you every step of the way and to find flaws in the prosecutor’s case. To learn more about how we can help your case, please contact our firm today at +1 (416) 628-2041. 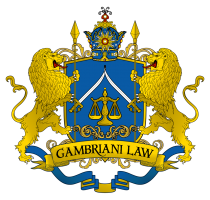